One of the biggest misconceptions among DJs is that you “only need” subwoofers for larger crowds or bigger rooms.

That’s just not true. At all. 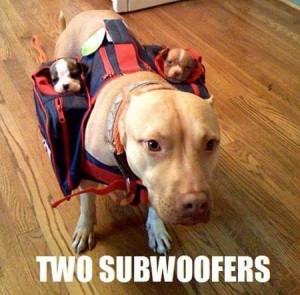 Music is recorded on a spectrum of frequencies. From high to low. Everyone knows this.

Every speaker cabinet has both an upper, and lower limit to the frequencies they can reproduce. The “tops,” or speakers DJs use are no different.

Without subwoofers, specifically designed to reproduce the lower frequencies in the program material, the resulting sound is weak, thin, and hollow. Of course, modern day speaker cabinets sound great, and many do a respectable job of reproducing a limited amount of low end, but they can still only go so far.

DJs who try to run modern dance music without the benefit of dedicated subwoofers are often the ones you hear so many complaints about when it comes to sound. Because their sound lacks low end extension, and has no real body, they’re forced to crank the volume a lot higher than they should have to to fill the area they are in. The result is simply LOOUUUUDD, shrieky, distorted, and still WEAK sound. In addition to sounding terrible, and causing ear fatigue for everyone around them, they’re also placing a ton of unneeded strain on their speakers and amps. When the sound starts to get distorted, they even run the risk of damaging or blowing their speakers and amps!

Having the low-end extension offered by dedicated subwoofer enclosures becomes especially critical at events outdoors, which an ever-increasing number of wedding receptions here in Northern California generally are.  The sound disperses way faster in these outdoor settings, and higher levels are generally required to cover the same amount of people in the same amount of space because of this rapid dispersion.

These outdoor receptions and events are often attended by sound restrictions or ordinances because the location is in either a residential area, an uneven, mountainous setting where sound will echo, or is out in the middle of a large, flat area, where the sound simply travels farther.  In these cases, the initial gut instinct says that having “more bass” would be undesirable.  Here again though, the truth of the matter is counter-intuitive.  We have to remember what we said before.  Providing warmer, fuller sound, concentrated right when and where you need it means you don’t have to turn up your sound system AS A WHOLE as loud as you otherwise would!

The result?  Less echo, less sound travel, fewer grumpy neighbors, no 10:55 PM visits from local law enforcement, and so on.

Ask your potential DJs how many subs they typically bring to events. If they say “none,” that their tops “don’t need them,” or that your event or room “isn’t big enough to need them,” keep looking.

Having subwoofers at your small to medium event ISN’T “overkill,” and doesn’t mean it’s going to be “too loud” or have “too much bass.”  On the contrary, it simply means warmer, fuller sound at more reasonable volume levels all night.  If your event has music, even for background, there is a TON of benefit to having a nice, full sounding sound spectrum, and no downside whatsoever.

And yes… It also means the ability to THUMP when the time is right!

For your truly professional DJ service provider, the question is never “do we need subs?” but is rather “how many do we need?”